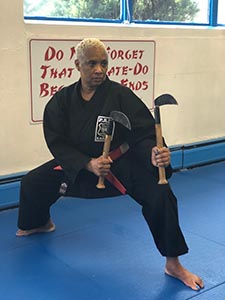 Renshi Debbie Barr is a 6th degree black belt in Seido Ryu Karate. Renshi has been training for 23 years and is currently the Sempai of her dojo. Renshi is the highest rank student under Soke Larry Barr. Renshi is a world-class competitor and has won World, National, and State Championships.

Renshi has been married for 20 years and has four children. Professionally, she is the Court Administrator for the City of Englewood, New Jersey. One of her greatest accomplishments was being selected to perform kata with her daughter Serena at the 2017 International Hall of Honors in Barcelona, Spain.

Renshi Barr is a member of the Woman's Martial Arts Network. She has also been ordained as a minister in the Martial Arts through Shinja Martial Arts University (SMAU); her title is "Reverend."